Second Life is 14 years old, that is very old.

Running around the excellent 14th anniversary community celebrations and having just celebrated the 8th anniversary of my 1920s Berlin sim and the 6th anniversary of Berlin’s Eldorado Cabaret, I started thinking about the facts and figures, the numbers and records of our old virtual world.

And to this purpose I thought I’d try and collect a few records.
But I’ll need your help gathering all the data.

What kind of records do we want to collect?
As many as we can.
The oldest still active avatar, longest running club, private region owned by the same person, oldest roleplay sim, oldest shop, best selling item on marketplace ever, oldest item still for sale on marketplace, longest partnered couple, oldest blog, etc, etc.

You name it!
If you think you know of something in Second Life that is breaking some sort of a record, share it in the comments and I’ll make a list out of it.

Just for fun and to give some of these oldtimers something to brag about!

According to Wikipedia, the first and thus oldest avatar in Second Life was Steller Sunshine, it looks like she was last online just a few days ago, so I guess we’ve found the oldest and the oldest still active avatar!

The first region was called “Da Boom”.
It too still exists, if of course this is the same one as the original.

So I guess we have 3 entries on our list already;

Let’s see what else we can collect!

After years of bothering Lindens about it, trying to threaten and blackmail them, hiding in the Linden Lab HQ and jumping out during meetings demanding it, after hiding in Ebbe’s garden and shouting at his house with a megaphone about this (some of these situations may have been made up) it is finally happening;

And that is a bit of an understatement as the masters of time and weather have decided to tweak it all a bit more and added some other fun toys as well.

For years I’ve tried to mimic the time of day in RL Berlin in my 1920s Berlin sim, but as day cycles had a 4 hour setting, I had to manually turn the sun on or off, twice a day… rather drastically… for years…
Just so I could give visitors to the sim a realistic experience.
One they could always overrule and set to day light on their own viewer if they didn’t like it, but at least the option for realism was there.

So now finally I can stop doing this and program a realistic 24 hour day cycle for my sim based on if it is day or night in RL Berlin.

These changes are officially called The Windlight Extension Project.

So they are planning a day cycle setting that is set between 4 and 168 hours and this can include multiple sky and water settings per day.
This means I can finally create a 24 hour day cycle starting with sunrise, going on to noon, sunset and ending with night.
And this cycle can even be programmed for an entire week!

Some more interesting things that come with this huge pack of improvements;

This is EXACTLY what I’ve been hoping for, it will give my sim more realism without me having to manually tweak this stuff and turn day into night and the other way around. 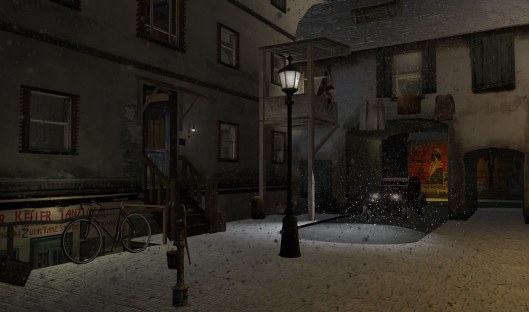