Ok, I know I’m just a bitter old woman who doesn’t understand happy hip young trendy people but seriously?
Magic Leap has just introduced ‘Avatar Chat’ and just like with Facebook’s VRchat, they think it is appealing to make it look like a game for 5 year olds.
While we in Second Life have had pretty decent looking avatars for quite a few years, both VRchat and now Avatar Chat think we’re ok with cartoon characters.

And of course, maybe that is exactly what young urban professionals want who use VR to share healthy exciting cooking recipes… because yeah, that’s what we all would use VR for right?

Just ignoring the very ugly Magic Leap logo, which also looks like a failed character by a dodgy Chinese company trying to be like Disney, I’m immediately annoyed by the controller.
It is 2018 and we’re still using controllers in VR?
Are we still waiting for the gloves or other wearables to hit the market?

Yeah I just want to make a call, so lets point this thing around and click a trigger 3246 billion times in stead of just pointing with my vinger or you know, give a voice command…

Our hip young trendy friends in their groovy fancy expensive homes apparently have the mental age of a child.
They give each other “high fives” that for some reason make flamingo firework appear, make silly sounds and send heart pictures because they like a picture of a meal…
Someone makes an astronaut appear for no reason and it is time for a “fist bump”, again with firework.
If I was in this VR chat with them, I’d be bumping my fist into their faces by now.

But it seems like that’s all they wanted to do, some silly stuff and then they go back to their busy professional lives…

Maybe it is just me being grumpy, cynical and old and I do realise that young hip people in general are pretty stupid these days, but this video is really quite underwhelming, to put it mildly.

Now the last time I checked Sansar didn’t have some of the things both these VR chat services offer but they are already looking a LOT better.
Of course I have no idea about how much work is involved in programming any of this, but looking at this, I reckon it wouldn’t be that much of an effort for the Sansar team to create a VR chat demo that would blow these videos out of the water.

Ebbe showed the Wall Street Journal a short demonstration of Sansar at the WSJDLive conference.

In an apartment he moved a few items around, quite easily and with the use of a little Hand-held (virtual) device.

He also moved himself around by clicking a spot on the floor, we see an icon on the floor with two feet on them.
Going around a virtual world by clicking where to teleport is of course far from ideal but until we can get good and affordable omnidirectional treadmills that actually work well, this is a solution you can see in most virtual games, worlds, etc.

One of the presenters asked if he had any food in his apartment, unfortunately I have not yet been let in so he couldn’t even offer them a glass of schnapps.

Ebbe also mentioned that a few hundred users are now in Sansar, no I’m not one of them, I know, it is a scandal isn’t it?
How on earth do all those poor avatars manage surviving there without my schnapps?!

You can see the full video by clicking here.

On Twitter I also found a short video of Sansar Avatars.
They look pretty decent but the movement needs some work.

Imagine being able to bring your 360 degrees camera into Virtual Reality, just set it up in the club, house, park or city that you’ve build yourself in Second Life, record it and then share it online with people from all over the world.

Let them get a taste of where you live in VR, let them look around and even give them the feeling they’re actually there by looking at it with their VR headset.

This is now possible!
Yesterday Electric Shepherd from Vimagine (who also worked on the ‘Virtualize it’ documentary for ‘Der Spiegel’) and Draxtor Despres came to 1920s Berlin to test out an amazing 360 degrees camera to film the, as far as I know, first 360 degrees video shot Live in Second Life in real time.

The camera rig was made by Arduenn Schwartzman (of Warbug fame), it has audio and video syncing capabilities and all recorded tracks are then aligned in post production. 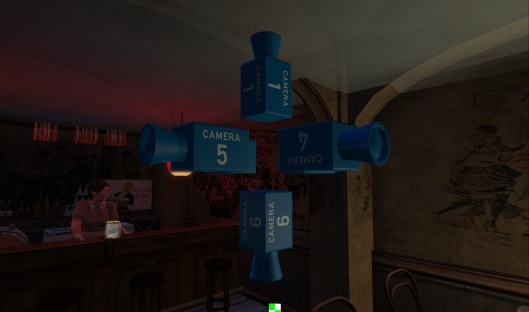 Even though this is still just an early test, it is already very impressive.

I can imagine short clips like these made in sims all over Second Life being used to show outsiders what life in our virtual world is like and the things that they can experience there.
Because these can also record busy events with lots of people and with many things happening at the same time!

Not only are these just fun videos on youtube, but they are very impressive when viewed through the Gear VR, the Cardboard VR or other headsets.
And not just that, it will also allow me to show off my sim in a whole new way to people who may not have tried Second Life, don’t know how SL works or who don’t have a computer that can handle SL.

And imagine making a full length machinima with this technology!
We could be making 360 films while people in RL have only just experimenting with it.
Once more the people in SL are groundbreaking.

You can see this pioneering footage here;
(not all browsers support 360 degrees video)

Some technical details send in by Draxtor;

And this article wouldn’t be complete without this earlier 360 degrees video in VR experiment by Zuza Ritt;

When Linden Lab released a new Oculus ready viewer, one that worked with DK2 and CV1, the reactions were, to put it mildly, not enthusiastic.
I wrote about it in my previous blog post that you can read by clicking here.

Today Linden Lab announced they have removed the Oculus Rift viewer from its alternate viewers page.

The Oculus headset picture and link to more information  about using it in SL seems to have also been removed from the main page on the official SL website, at least I no longer see it.

In this discussion on one of the official blogs the following comment was posted by Linden Lab;

Thank you for experimenting with our Oculus Rift Project Viewer and offering your feedback. Unfortunately, the Project Viewer that we recently made available didn’t meet our standards for quality, and so we’ve now removed it from the Alternate Viewers page.

By definition, Project Viewers aren’t ready for primetime. The purpose of these experimental Viewers is to share with you the earliest possible version of what we’re working on, so that you can see what we’re up to, help discover problems, and provide feedback. In this case, though, we’re not ready for that, as those of you who tried it have seen.

We can’t say at this point when or even if we may release another Project Viewer for experimenting with the Oculus Rift in SL.

We want to prioritize our development efforts around initiatives that we know will improve the virtual world and bring more value to SL Residents, and due to some inherent limitations with SL, it may well not be possible to achieve the performance needed for a good VR experience. (In fact, this is one reason why we’re creating Project Sansar a new, separate platform optimized for VR).

We greatly appreciate the interest in trying SL with the Oculus Rift and are grateful that several of you took the time to try the Project Viewer. We regret that the quality was not up to our standards, and we will of course keep the community posted if we release a new Project Viewer for VR in the future.

Of course people were very unhappy with the new viewer and yes, it was not good enough for people to actually enjoy Second Life with.
But hearing that they may not release another one is very disappointing.

As imperfect as Second Life is for Head Mounted devices at the moment, I still was extremely impressed with my visit to 1920s Berlin wearing the DK1.
Regardless of lag and if the frame-rate was fast enough or not, I was exploring MY world, the place I build and loved.
I didn’t care about the imperfections, I was inside my Second Life.
Of course, if you can’t make it work, releasing (another) viewer is probably a good idea.
But it is going to be months, perhaps even years before most of us can start enjoying Sansar as a virtual world that is as interesting and has as much to offer as Second Life and it really would be nice if we could at least have some fun with the HMD’s in Second Life.
Even with the old Oculus Viewer and head set, I loved every minute I spend in SL with it.

So I hope that that we will see another HMD viewer for SL, regardless.