Illiastra Ascendent (nvzn Resident) (aka James Reichert) who has been experimenting with 360 degrees videos and photography within virtual reality and specifically Second Life, has now developed a system that allows you to make interactive panoramic pictures yourself.

The Illiastra Panoramic Camera System (click) will allow you to record and then edit screenshots you take in Second Life into one large panoramic picture that allows you to interactively look around with your mouse.
A wonderful way to give people an impression of what your sim in SL looks like without them having to download the software, setup an account, create an avatar, find your sim, etc.
And not only will people be able to see your sim without downloading Second Life, they can also see it with the graphics and windlight setting you had in mind when you recorded the picture and no lag.

You can upload these panoramas to Facebook or even look around with your VR headset or Hololens, as demonstrated here;

I think this would look really nice as part of the destination guide or just as general promotion.
I’ve shared a few of these on the 1920s Berlin page.

Illiastra has now put all this information together into one kit that you can buy on marketplace (click).

I look forward t seeing lots of these panoramas popping up online soon.

Ever thought about meeting a SL avatar face to face in your RL living room?
Or see your SL house appear in front of you on the drive outside your RL home?
Or perhaps work on a SL dress in your RL workshop?
Thanks to Augmented Reality this is now becoming a possibility and it is only the beginning.

James Reichert has been working with Virtual and Augmented reality for years and early on experimented with Kinect, 3D tv and even building his own virtual surroundings for presentations. During his research he discovered Second Life, joined as Illiastra Ascendent, explored this virtual world, created something, sold something and, like the rest of us, was hooked.

Recently James started experimenting with the Microsoft Hololens in combination with Second Life and his very first tests are already very promising and exciting.

Look for instance at this video he made, showing a SL-like avatar with a dress he designed.

He is looking at her through the Hololens, an Augmented Reality device that does not only show you a virtual object in reality but it also manages to lock it in a specific location so it stays there while you move around.

Right now you can see the avatar or furniture or whatever object you’ve created, as if it is with you in your real life, you can walk around it, see it from all angles. 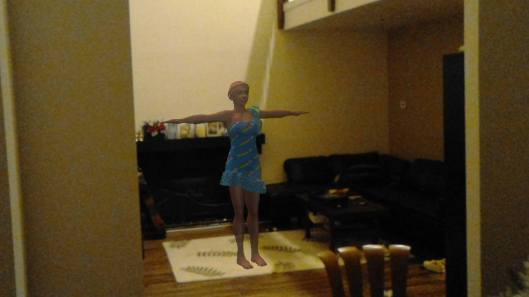 But it won’t be long till you can do more than just watch, can you imagine actually building something virtual in real life?
Standing in front of an avatar wearing  your dress that you then lengthen, shorten and re-texture, right there and then. But even if you’re not a creator, wouldn’t it just be fun to see your own avatar standing in your RL room? Or even have another avatar visiting you in RL and chatting with you…

And on another level, a building James made in ‘Chief Architect’, which is not that different from what we’re used to in Second Life, is, lets call it ‘rezzed’ in a parking lot. Allowing us to look around it but even go inside and check out the details.

As someone who has created lots of buildings in Second Life, I’d love to walk around them in VR and AR, and looking at the future again, imagine being able to actually build this way or at least change the wallpaper while walking around your parking lot.
I can’t wait.

These modern HMDs aren’t VR, they are merely the conduits– the summoning circles– through which our avatars will finally be unleashed upon the waking world. The neo-VR industry built them thinking it would get them into the metaverse… they never considered what would come out.

James will be a guest on the Draxfiles Radio Hour soon and we’ll talk more about his experiments and the future possibilities of this technology.