Together well known VR Tv personality Saffia Widdershins and I got to interview Ebbe Altberg, aka Ebbe Linden, CEO of Linden Lab and thus, boss of our virtual world.

After a rocky start (something always goes wrong when audio and video are involved in SL) we got started.

It was interesting to note that Ebbe had returned to using his original avatar and was no longer wearing a mesh body.
Thus allowing his face to actually move as he spoke.
He said that he had only worn the mesh body as part of a presentation but I wish I’d asked a little further, because I can’t help wondering if perhaps he didn’t like the mesh avatar very much, especially the fact that you can’t really open your mouth with those avatars.
A rather bad side to the ‘new’ mesh avatars Linden Lab announced a while ago.

Nothing much new was announced or revealed during the interview, if you’ve been keeping up with the news and especially if you watched the earlier Linden interviews, you’d known most of what was being said already, although here and there extra information was being added but generally Sansar is just in too early a phase to get into real detail.

I was too busy to make notes, so I hope I remembered (and read from others) the below correctly;

Near the very end of the interview Ebbe said that he really enjoyed the chat and that we should figure out a way to do something like this again.
This made me think back to an idea I had a few days ago and posted about here on my blog;

I had discussed this with Saffia Widdershins before the interview and in a spur of the moment sort of thing, we decided to take Ebbe up on his offer and told him that we should have some sort of Question Time, but with Lindens.
Jokingly I suggested we could do one every week, but Ebbe thought that once a month would probably be better.
I replied that it was a deal, a verbal agreement and Ebbe agreed.

Afterwards, off the air, we briefly talked about this idea a little longer and it seems there really will be a Question Time show coming to Second Life.

So in a way, we had a little scoop after all.
I’m very excited about this because I feel it will make communication between us and the Lindens even better and there seem to be so many people with questions.

The idea will be simple; we invite Lindens (and perhaps one or two guests as part of a current SL related news story) and let the audience ask the questions.
Don’t start sending in questions just yet, we need to build a stage, find some space, set a date, etc.
But we will of course let everyone know when it is going to happen.

You can see the whole interview here; 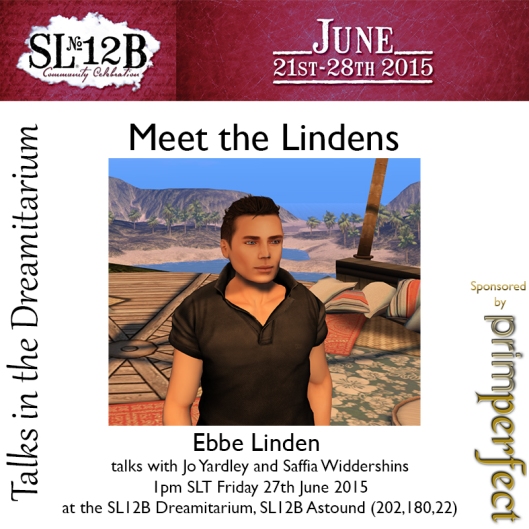 As part of Second Life’s 12th birthday (aka SL12B) I’ve been enjoying a series of interviews with Lindens.

I sneak into the audience and sometimes even get a chance to force my own opinions and questions to the front in a subtle and ladylike manner… ish… sort of… shouting is involved…
You may have read my near- hysterical post yesterday about when Oz Linden announced 24 hour days are coming, partially as a result of my nagging 😉

Since Linden Lab opened their doors and  allowed the Lindens to go out into the wide open world again we’ve been seeing a lot more of them and generally people really like seeing, hearing and meeting them in the wild.
And you can see that in these SL12B interviews as well, when Lindens get on stage, regions fill up.

The interviews are very good, veteran interviewer Saffia Widdershins does her job rather well together with Elrik Merlin, Draxter Despres and others.
Yes, they’ll even let me on the stage to talk to Ebbe.
If you’ve got any questions for him, leave them in the comments section, I may be able to squeeze them in.
If not, make sure you’re in the audience and ask them yourself!

But no matter how much the Lindens talk, you always think of something to ask that doesn’t come up or that you only think about after the interview is over.
And it made me wonder if perhaps it would be interesting to have more chat shows like these.

And no matter how interesting the interview is, the interaction with the audience is often even more exciting.

In the UK there is a tv show called ‘Question Time’, a hand full of politicians sit on a stage while the audience asks them questions.
They can ask (almost) anything they want, several questions are handed in before the show starts but people can also put their hands in the air and ask something else.
You can imagine that these shows are very entertaining.
And of course the questions can get quite difficult sometimes.
As far as I am concerned every country needs a show like this, a place where the politicians directly have to respond to the questions of their employers; the people.

I started wondering if perhaps this would be something great to have here in Second Life.
Imagine, once a month (or more often?) 3 or 4 Lindens and 1 or 2 guests who for one reason or another have something to do with whatever story is in the news at that time, are invited to Second Life Question Time.
The public gets to send in their questions in advance, there is a host, someone like Saffia, Merlin, Drax etc. and together with the public, for one hour, there is a debate.
The news of the moment is discussed, the questions that were send in are asked and members of the audience with lovely ‘hand the air’ gestures can get to ask questions as well.

This is something I’d watch and I bet so would many others.
It would be the cherry on top of the whole new openness that has changed how LL interacts with the people of Second Life.
What do you think?
Do you like the idea, is it something you’d watch, do you already have questions popping up in your head?

Here is a video showing the UK Question time, not very exciting, but it shows you the general idea of what it is;

And to make up for that video, here is one mocking Question Time;